Held annually at the The Yuma Armed Services Park (281 S. Gila Street) in downtown Yuma,  the Fourth of July Flag Raising ceremony honors the military in Yuma. The 7 am ceremony features speakers from Yuma's two militray bases - Marine Corps Air Station Yuma and Yuma Proving Ground . Marines and soldiers at the bases are recognized during this ceremony. The highlight of the morning is the raising of the Stars and Stripes at the park as well as fromthe mast of Yuma's iconic water tower at Friendship Park. 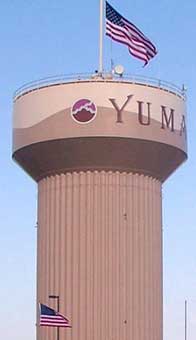